All through the night, she could hardly sleep a wink. She kept worrying of a million things that could go wrong. She was not even given a proper opportunity to say goodbye to everyone, especially Osas. What would he think happened to her if she never showed up to see him as promised? She finally promised herself that she would get in touch with him as soon as she got to her destination, and with many other comforting thoughts, she drifted off to sleep just before the first cock crow.

The first rays of light saw her already packed, kneeling before her parents, as her father prayed for her and her mother wept silently. She had not overcome the overwhelming sadness of losing her daughter to the hands of the unknown, though she knew she had to do it for the sake of the family.
”You will succeed and prosper, no eye of the enemy will see you on this trip, you will go and eat the best of the land” Her father continued like this, pouring libation sparingly until Aunty Lara who had been looking on in patience interrupted him.
”Ehmm, I think we need to be moving now so we keep up to schedule” She told him nicely.
”Okay, you please take care of our daughter, you know she is our first girl…”
”You know that I will” Aunty Lara responded to her
father ”She is like a daughter to me to and I will never let anything happen to her”
”Okay, thank you very much, in that case it is best you get going so you don’t run late”
Adesuwa scooped up her bag and briefly hugging her mother and younger ones, followed her aunty into the waiting taxi and when they were properly settled in it, the driver revved the engine and zoomed off. Adesuwa couldn’t bring herself to look at the faces of the family she left behind, and she began to weep silently. Her aunty meanwhile was perched in her seat watching Adesuwa with a slight smile on her face. She had witnessed this scene a lot of times though with different girls, and she knew that very soon,
Adesuwa would adjust to the life ahead of her, and laying her head back, she went into a light sleep.
They got to Benin in less than an hour, and the taxi stopped them in front of a building that resembled a hotel, though no one could be seen around through the high fences.
”This is where you will be staying for the time we are here. You will get a chance to meet the other girls that will be going with you” Lara told her
Adesuwa was curious about her trip but she chose not to ask any questions till they got settled properly. It took them a while to get their luggage to the front of the house where they were met by the hugest man Adesuwa had ever seen, as he was well over six feet tall and muscularly built. He was also wearing a tee shirt that accentuated his muscles and he had a mean look on his face.
Lara introduced him to Adesuwa as her personal
assistant, and he grunted in reply, helping them haul their baggage into the house.
Lara took her to a room on the first floor, and handing her the keys, told her that was where she would be staying. It was a large room, and larger than her entire house back in the village, and Adesuwa looked on in wonder at the seeming luxuries of the place. This would be the first time she would be sleeping on a bed so soft or making use of a bathroom like the one attached to the room. She was still admiring the room
when her aunt came back holding a tray of food.

”I know you must be hungry after the long journey so here is food for you. After you have eaten come and join us in the sitting room downstairs”
”Thank you ma” Adesuwa replied collecting the food. She had wanted to ask who ‘us’ was but had thought better of it, seeing that she would soon see. When she had eaten, she went down the stairs to meet Lara, and was quite surprised to see that it was a full house. Aunty Lara was sitting on the largest sofa, flanked on both sides by six men larger in build than the one she had encountered when she came in. Standing on their feet around Lara were a dozen other girls roughly the same age as Adesuwa.
”Finally you are here” Lara began as everyone turned to look at the newcomer ”Now let us begin, all of you can sit on the ground” Lara commanded the girls. Adesuwa found the instruction a bit strange, but complied along with the other ladies as she noticed that Laras voice was a bit sterner than usual.
”Now you will all be going to Italy next tomorrow. Your documents have already been processed and will be given to you at the point of departure to avoid any funny business. But to make sure you do not disobey me, I am going to take you to a place tomorrow where you will swear that you will be obedient. Is that clear?”
She asked, her voice ringing out in the cool evening air.
A girl in the group raised her voice in protest
”I cannot follow you to swear o, I don’t understand…”
She was cut short by one of the men who stood up from his seat and landed her a scathing slap. She fell on the floor as the assailant continued raining blows all over her body. Adesuwa along with the other girls were shocked at the treatment being meted out on her, but they were powerless to put a stop to it. The girl kept screaming and wailing until Lara who had been looking on impassively while it was going on called out
”That’s enough Jack”
He straightened up and went back to his seat, but not before landing the writhing girl a kick on her back.
”I hope you have all learned your lesson not to be too smart” Lara said
Adesuwa looked at her aunty and shuddered at the transformation that had come over her in such a short time. Now, she had a terrible look on her face, and she betrayed no emotions. It was hard to imagine this as the same person that had brought her from the village.
”As I was saying, you all will follow me tomorrow to babas place, and god helps any of you that does not wake up as early as five to follow me. I will deal severely with you. And one more thing, you will call me madam from now on. If I hear any of you call me my name I will cut your tongue out, and I mean it. Now run to your rooms”
The girls stood up and scrambled away, Adesuwa in tow, as they wondered what tomorrow would bring. 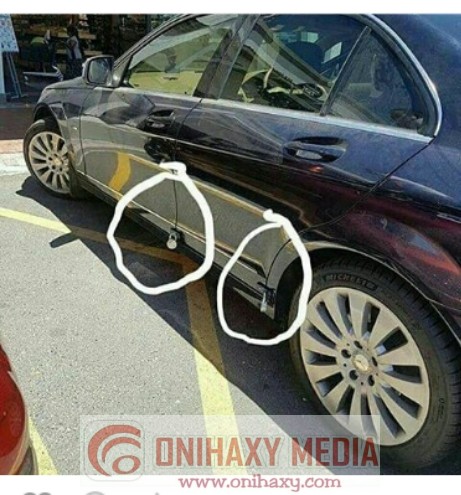 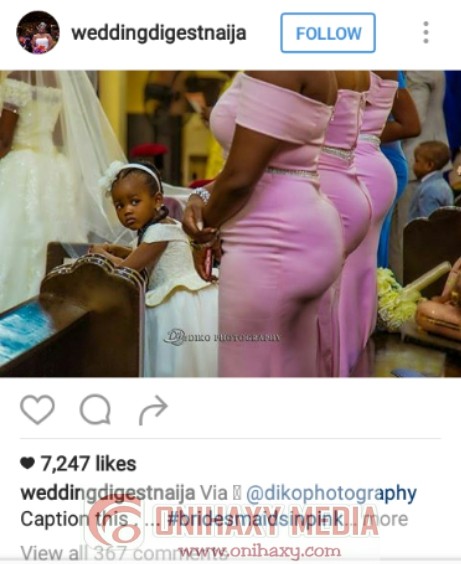 Photo of the day :- caption this bridesmaid picture