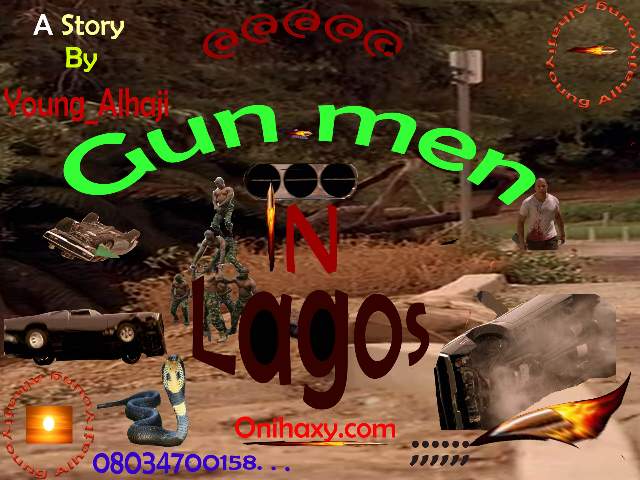 Gunmen in Lagos : by young alhaji
April 22, 2017
Posted By: onihaxymedia 0 Comment
Spread the love, please share with friends after reading

It was told to Terrorists by a sorcerer that the person who is going to destroy Terrorists is in Lagos, and his nick name is Young_Alhaji. I became scared because my nick name is Young_Alhaji and I base in lagos. I started looking for other people whose nick names are also Young_Alhaji, I found 74 people in lagos who calls themselves Young­_Alhaji including me. They were also scared too because they knew book haram will come after them. We were taking to a show. We were displayed all over the channels in the World. I wasn’t comfortable, I didn’t want Terrorists to know me because, I am sure they will surely see the news and our faces. I didn’t know if I should leave lagos or stay. ‘’Terrorists is going to kill 74 of us’’ I thought to myself. The government assigned Soldiers to protect us and we should be taking to a very big house for safety purpose. I didn’t agree with the idea, I knew Terrorists could just set an explosive bomb to destroy us all. The Government didn’t agree with me, they said the house will be guided by Soldiers, I still didn’t agree with the idea.

Me: I don’t want to die, we shouldn’t stay together; we should be separated

Soldier: we are not forcing anybody to stay; if you don’t want to stay you can leave.

Me: I am leaving

Soldier: Good for you people. But if the four of you won’t co-operate with us, you are leaving Lagos.

I always believed I am the one who is going to stop Terrorists because I have always thought on how to destroy them.

Young_Alhaji 2: why should we leave Lagos? Is it because we don’t want to join the rest?

Soldier: since you guys don’t respect the Government’s decision, and you guys are not Lagos indigenes, so we don’t want you in our state

Me: {laughed} we will leave, and I will stop Boko_Haram

Me: God didn’t ask anybody to be trained. He only gave one of us the capability to destroy Terrorists , so the training won’t change anything.

The four of us left the place, but we didn’t leave Lagos. I and the 3 Young_Alhaji lived together. I began getting tired of them because I didn’t like their characters. I didn’t know how to tell them, so I decided to leave Lagos alone the next day morning. That night, I was watching N.T.A news when I heard that the House was attacked and all the soldiers guiding the boys were killed. They didn’t know what happened to the 70 boys. I hurriedly showed the three Young_Alhajis the news.

Young_Alhaji {1}: we are very lucky, we would’ve been missing by now also

Me: we are not safe, they are still in Lagos and I am sure they are looking for us we’ve to leave Lagos.

Young_Alhaji{2}: I am sure they’ve killed all of them, they don’t know we are here so there is no need to run

Me: if you guys won’t leave I will leave

Young_Alhaji{3}: you Young_Alhaji, you are too proud. Even when all of us were adding numbers to our name, you refused to change yours, you are not our boss you are not anything we just left you.

I didn’t answer them, I went ahead to gather my load. When I left, one of them said he thinks I am a member of Terrorists , I was sent by Terrorists to destroy all the Young_Alhaji’s that was why I refused to stay in the house.

Young_Alhaji{3}: You are right, I think we should follow him and kill him

Young_Alhaji{2}: I am sure, let’s just kill him

I was at the door listening to them, I decided to hide to avoid been murdered by them. After some hours, I left Lagos to ogun state so that I will be Close to Lagos. The next day morning, I saw something to my greatest surprise. I saw myself wanted In Nigeria, it was all over the news that I am wanted. I think the three Young_Alhajis reported me and they believed. I was very disappointed in Nigeria, I didn’t know what to do, i decided to leave ogun state because I knew sooner, the poster will be everywhere and I will be caught. And if I am caught, I will be killed. I decided to go to a village in kaduna state. When I went there, I saw a very pretty girl passing by, I didn’t want to lose her so I walked up to her

Me: hello, please can I have a word with you for a minute

Girl: what do you want to say?

Me: I want to ask you some questions

Girl: why do you want to ask me some questions?

Me: ‘’which kind girl be this?’’ I thought to myself. Well I am a stranger here and I don’t know if I can get somewhere here to stay

The End Of Episode 1

Watch Out For Episode 2…

Tired of waiting for weekly updates?.  Order for a copy of the Complete Story / Ebook in Pdf or doc format from our Book store at a token.   Ebook purchase can be made with :

ALL transactions are processed securely by Interswitch and we do not store any of your informations.

(Downloads and deliveries are INSTANT &  IMMEDIATELY)