Alex placed his head on his office desk as thoughts ran through his mind, throwing him in a state of confusion, and everything was centered on Amara. She had changed and he could tell that the woman was not the same villager she used to be. She had challenged him; something that only a few people could do, but she had done it effectively. This annoyed him more than anything. He could not even begin to believe that Amara had stood up to him. Where had she found the courage to do that?

And this morning… she had looked… spectacular. Not for once looking like the same Amara he used to know. She had looked totally outstanding, even without make-up. He almost hadn’t been able to take his eyes off her bosom and the cleavage that was visible for all to see. She had always been beautiful but he never imagined that she could be that beautiful. This worried him also. He did not want her looking beautiful, he wanted her to look pathetic because that would give him the avenue to maltreat her freely. When he jad offered her the opportunity to own beautiful clothes, he hadn’t thought that she would look completely outstanding in them. It was probably not even the cloth that made her look outstandingly gorgeous; it can as well be the way she carried herself confidently, a trait that only just surfaced the previous day.

Now she feels he won’t go through with marrying Lisa. What on earth would give her that thought? Lisa is not only beautiful but sophisticated and rich; the ideal woman for him. He knew that he could take Lisa out to dinner parties and not be scared that she would disgrace him with bad village attitudes and poor table manners. Despite the fact that Lisa was a spoilt brat, she was perfectly mind blowing in bed and that was all he always looked for in a woman. Amara is a total novice where sex is concerned, she was nothing more than a ‘use and dump material’ to him, he never imagined that she would end up getting herself pregnant. He banged his fist on the table. Now, he would end up marrying two wives. He murmured a curse under his breath. Leaving Lisa was not an option and leaving Amara was even worse. He could not afford to lose this company. It was all he lived for.

The door to his office opened unceremoniously and Toba walked in with a grin. “Hey man” he cooed.

Alex raised his head wearily from the table and looked at his friend. Toba was smiling down at him but he could not even muster enough strength to return the smile. His face seemed to continuously hold a frown ever since Amara came into his life. He hadn’t seen Toba ever since they finished service and instead of him welcoming his friend with a beaming smile, all he had was a deep frown and sweaty palms. “Hey buddy” he murmured.

Toba frowned and accepted his friend’s handshake before sinking into the opposite chair. “This is not the kind of reception I expected to get after weeks apart” he said.

Alex exhaled. “I am sorry Toba, my thoughts just seem to be scattered all over west Africa”

Toba smiled. “If that is the case, I guess it would take years to fully gather your thoughts”

Alex’s frown deepened. “I am sure you are right”

Toba whistled and frowned deeply. “OK. I really need to know what is responsible for shaking the confidence of the almighty Alex Bello” he said. “Only a woman can do that”

“What the hell are you talking about?” Toba’s interest was already pricked.

“I am talking about Amara”

Alex hissed. He could not blame his friend for not remembering the name of their betting contest. He would not have remembered her name too if she hadn’t shown up on his doorstep with pregnancy claims. “Amara. The girl I deflowered during service”

Toba’s eyes widened. “Yes! What about her? I thought you were done with her when you won the bet” 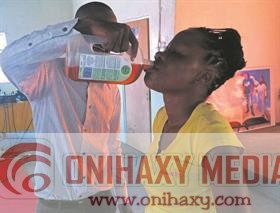