Osa woke up to the sound of loud music with his head banging very hard. He tried to look around but his eyes were blurry. All he could see was different paintings all around the wall of a very large room. Da Vinci’s Mona Lisa painting lies on the wall in the middle of the room, the Dora maar au chat painting by Pablo Picasso lies beside it. It was more of an art gallery or so its seems to be in the blurry eyes of Osa.

He tried recalling the event of the previous night and how he got here. He remembered he was having a romp with a lady with a big booty, he was slamming hard into her when his favorite Selina walked up to him and started rubbing his ass and back with her palms, planting kisses at every spot as she rubs on. The taught of selina brought smile to his face, he remembered the first time he met Selena , he was out shopping on the streets of Corso Venezia.
Corso Venezia is a street in Milan, Italy. It is one of the city’s most exclusive and elegant avenues, being part of the city’s upscale Quadrilatero della moda shopping district, along with Via Montenapoleone, Via della Spiga, Via Sant’Andrea and Via Manzoni. The city also boasts a great collection of Renaissance, Baroque, Rococo and Neo-classical palaces, parks and gardens.

She was shopping for a wedding dress and her beauty was too good to let go, so Osa walked up to her exchanged pleasantries in the little Italian he could speak.

Selena: your pronunciation of Italian words are laughable

Osa: am still learning and I hope have found a teacher in you

Selena: well if you can pay the price

Selena: am going in the to get this cloths on, could you please help me check if they fit?

She went in while osa followed and waited in front of the curtain, she puts on the first, walked out, cat walked for osa and asked how it looks. Osa was dumbfounded by her beauty, she saw the effects she was having on him and just smile seductively. She got back in the changing room and was trying the next cloth on, as she pulled the cloth down from her head she saw him right in the changing room, the bulge from his trouser brought out a smile from her… without saying a word, Osa grabbed her stuck his tongue in her mouth and started kissing her ferociously . Selina moved back told him to calm down, pulled off the cloth she was testing and sat him down on the only stool in the changing room. She moved her head closer to his, gently rubbed her lips against his the stopped, she did that the second and third time. This time osa couldn’t bear it anymore, has she tries to rub the lips again he grabbed her head and then both lips started kissing and fighting for supremacy. Slina broke herself loose again removed her bra, and without a second invitation, Osa grabbed the petite boobs and this time around sucked the gently and expertly, he could put both boobs in his mouth at once by joint them together and later he sucked them gently . he bit the Tip in a soft manner and she let out a soft moan as he was sucking her boobs, she was making dreadlocks on his hair. Osa was tired of sucking and wanted a real action but her trouser and belt were restricting his movement, he tried fumbling with her belt but to no avail. She saw his travails and stood up from his body , lifted him up, pulled down his trouser and released the anaconda between his leg. Seeing the size of his dickk, she exclaimed wwooowwww and then kiss the tip of the the It which send shivers into Osa, she then spat a little on it the took the cap into her mouth, osa felt a cold sensation all I’ve him, then she increased her tempo and was sucking at a timed interval , she suck 5 times then rolled her tongue on the cap twice and also make a howling sound after that, this she continued until Osa was singing his native songs osamudiame………

When osa got back to his senses, he noticed he was all alone and a cube of ice was on his diicckk, with a note beside him that reads ‘ FIND ME’ his cloths where gone his phones, wallet and IDs. The only thing left was his boxers singlet and master card. He stood up put on the little stuffs he was left with, shop for a shirt and jean, paid his and hers, went to a pay fine and dialled his number……………

Splassssshhhh, a bucket full of water was poured on his body to bring him out of his trance, then he could see clearly that he was at the home of Don Nesta.

Don Nesta is the controller of all trafficking businesses in the Naples area of Italy who seem threatened by the arrival of some negritos as blacks are called who seem bent on sending him out of business. 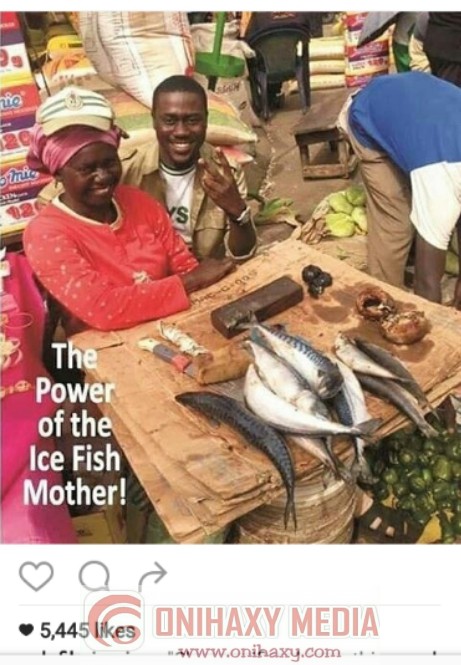 See this emotional and touching appreciation from a boy who was trained by a fish seller mother.(pics)