Her mum was screaming her name, shouting at the priest to release her daughter, with her was the ayilala priest whom she brought from the west. The ayilala priest had a conversation with the local priest and then he opened the door for Onoke. She jumped into the waiting arms of her mum and they both started crying is unison.

They all moved from where she was kept with Davids body to the palace of the village chief. The palace was in a confusion of its own since the thunder took the chief seat away to the market square.

Chief: priest what is happening

Priest: My friend of the Oracle here have some things to share with us (pointing to the ayilala priest)

Chief: you are welcome priest

Ayilala: thank you your Highness

Chief: so what do you have for us?

Ayilala: your Highness, the occurrence in your palace is a show of anger of the God of thunder for the suffering you meted out on a righteous person.

Chief: I hope your righteous person is not Onoke the murderer? Because eyewitnesses of the incident gave their account against her, and the good book said, out of the mouth of two or three witness the truth shall be established.

Ayilala: the good book is very correct, and you have done what any mortal will do. But the gods sees things hidden from we mortals, and today we will put the witnesses to test.

Chief : how do you mean?

Ayilala: the water I have with me here will lead us to the truth. Every witness including the suspect will drink of it and anyone who had lied amongst them will see his stomach protruding till it takes his or her life. Then we will know the truth and the truth shall set the whole community free just as the same good book said.

The chief sent for the families of the boys but the news returned to him that they all had left the town to his amazement. He summoned all their families and require that they should produce them before three days or else they will all be made to pay dearly.

Chief: ayilala, so what are we to do with the girl now

Ayilala: the gods demand her freedom and appeasement to take away evil occurrences as a result of the wickedness meted out to her

Chief: what form of appeasement?

Ayilala: the gods require that the dead boy should not be buried but cut in pieces and dispatched in to the forest, and his family are to return everything they have collected in three folds. And you the chief must apologise to the family for wrong judgment.

Chief: my priest what do you have to say

Priest: so did the gods spoke to me also

Chief: let the will of the gods be done then.
And so Onoke was released to go with her parent, she returned home to more joy and funfair, but in her lies sorrow, pain, shame and most of all revenge. She vowed within her to make each of the boys pay dearly for what they did to her but first, she made up her mind to leave the village immediately with no plans of returning anytime soon.

Early as 10am the next morning she parked her bags, bid farewell to her parents and head for Lagos park, she took a long look at her home and said ‘ I won’t be seeing you in a long time’

Since the first encounter Femi had now become an addicted smoker, three months after the robbery his father eventually lost his battle with HBP, this made his mum more dejected and this totally affect her pyshc and she had to be transfered to yaba psychiatric hospital popularly called Yaba left. Femi was left to fend for himself and his sister. With no job and no money, he had to drop out of school and with the help of Kasali he was able to get a bus to work with as a conductor.

His sister on the other hand was working as a cleaner in a school with her salary not enough to last her a week not to talk of a month.

A year after the death of their dad, their mums condition was worsened. Having spent all the little money they could raise on her treatments, they were tired and exhausted. During this time, the landlord asked them to vacate the apartment as they have not paid a dime for two years. After spending another three months without paying, they were eventually thrown out of the house with them agreeing to sell the few sellables in the remaining property.

Femi decided to move over to the garage, while his sister had to move in with her boyfriend.

After three years of neglect, their mum eventually kicked the bucket and was buried by the hospital authority.
Femi grew in popu!arity in the garage due to his good looks and ruggedness, and good English, his only shirt ( Chelsea Jersey) also added to his popularity.

Over the years, he had grown to become a leader of group of the garage unions and his opinions counts when a garage leader is to emerge.

Onoke looked at herself in the bus, and couldn’t believe what had happened to her in the past week, well am leaving it all behind she taught to her self, this is a vacation to remember she exhumed.

She got to Oshodi park at about past eight, the journey from iraokhor to Lagos is about seven hours plus. On this day, oshodi was uncharacteristically quiet and the presence of different military and law enforcement agency could be heavily seen. She wondered what could be happening. She walked towards the under bridge trying to get a bus to Bariga where she would then join another bus to Akoka.

This is just too silent she said to herself, she looked around and it seems she was the only one in the street, from no where a sudden fear gripped her, she held thight to all her belongings and increased her pace, she could here the sound of cars and their lights was visible on the oshodi one bridge, so she hurriedly wanted to get to the top of the bridge. As she was hurrying she didn’t notice that there was something on the road, she it her leg on it and flat she fell with all her belongings scampering on the floor.
femi cont’d

traders were selling their wares while the noises of ‘conductors’ calling their different destinations filled the air,

Femi was eating his roasted plantain popularly called Boli with groundnut under the bridge at the garage close to a lady selling different kinds of gins and alcoholic
drinks popularly called ‘paraga’. The sounds of Iyana Oworo New Garage, Ibadan Iwo Road, and different destinations made conversing a difficult job to do at the
garage, Femi was trying to get the attention of the ‘Paraga’ seller popularly called ‘Sikira Omo Ile Eleru’ meaning Sikira the lady with many assets, Femi had developed

his pocket, just to get her notice his philanthropic nature, she seems not to be interested in all is advances.

Femi is a good looking but badly maintained garage boy, actually born with a fair complexion, but there is something about garage life that makes even Micheal

Jackson return to his natural colour but with the terrible effect that comes with bleaching. Femi is actually competing with coal for the darkest creation. However, he
has a lovely set of white teeth that act like the only visible sign when he is in the dark.

Like most boys in the garage, Femi is a Chelsea fan, due to the name of his favorite dry gin. The old blue fly emirate jersey remains a constant, it seems he has a lot of
it. Boys in the garage usually mock him calling him ‘alaso kan’ the man with a uniform.
Sikira on the other hand was the contrast of Femi with a terrible bleached skin turning brown and several types of local tattoos all over her body. From scorpion to her

names to ‘arabambi’ written all over. She will pass for a very good impression for an advert on bleaching gone bad.
The day was going smoothly and Femi was gaining ground on is wooing of Skira when all of a sudden he heard a loud bang Poookkkkaaa, Pooookkkkaaa, and the

whole garage was thrown into confusion. Before he could say jack robinson the whole noisy garage had become a graveyard, there is this magic about Lagos, one

shot or the movement of about fifty boys on the same road. Wondering where everyone had disappeared to, he stood up and moved out of the shed, just as he

stepped out he was met with a resounding punch on his face gbbooosssaaa, gboosssaaa, he staggers a little, while losing the remaining boli with him. Just as he was

about gaining his balance, a big bang occurred again, this time the bang was quiet heavy in Femi’s head but no one around seem to hear it, Femi was dazed as the

bottle of coca cola landed on his head, not knowing where he was all he could hear was someone saying ‘ this guy get odeshi ooo, the bottle no gree bust for hin head’

just as Femi landed on the floor with a swollen , broken head and bleeding gum, all he could see was blood flowing, then came another one but this time the sound

was Splaaasssshhh and the sound was not as heavy as the former. Femi could hear the sounds of broken bottles falling to the ground, he tried to stop the blood
gushing out from every direction of his head like a man with a crown of thrones, with his palm but he couldn’t and then he passed out. 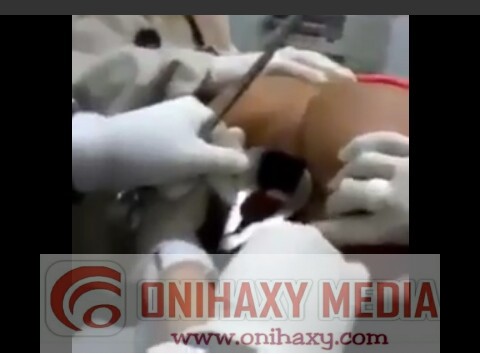