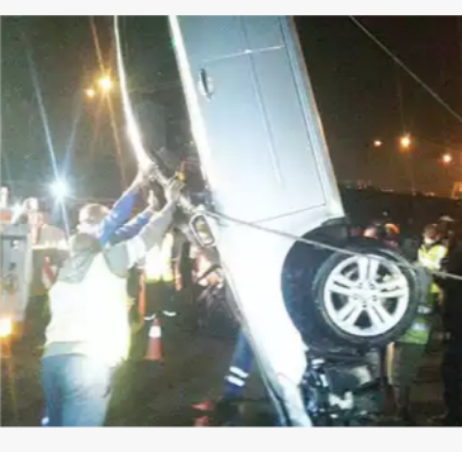 A pregnant woman, identified as Chinagorom Fustine, has been killed after her car plunged into the Lagos Lagoon from the Mekwen Bridge, Bonny Camp, inward Marina area of the state.

The vehicle, with number plate, Lagos MUS 38 BL, reportedly plunged into the lagoon on Saturday.

The driver of the Kia Rio, identified as Felix Aniele, was said to have swum out to the river bank, where he was rescued.

However, before help could come the way of Fustine, she was said to have died.

The General Manager of the Lagos State Emergency Management Agency, Adeshina Tiamiyu, said the car was towed to the Bar Beach Police Station, while the corpse was deposited in the Mainland General Hospital Mortuary, Yaba.

He said, “We received a distress call regarding a car that plunged into the lagoon at the Mekwen Bridge at about 7.47pm on Saturday.

“Preliminary investigation revealed that the silver colour Kia Rio, with two occupants, plunged into the lagoon around that time. The driver swam out to the river bank, while the other occupant, a female, was trapped.

“Emergency responders, assisted by the local divers, were able to recover the car from the lagoon and the dead body of the woman.”

Tiamiyu advised motorists to observe rules while plying the road.

The spokesperson for the National Emergency Management Agency, South West zone, Ibrahim Farinoye, said the victim, who was pregnant, was recovered around 11.47pm on Saturday

Gist: – Types of Girlfriends who can increase your blood pressure.