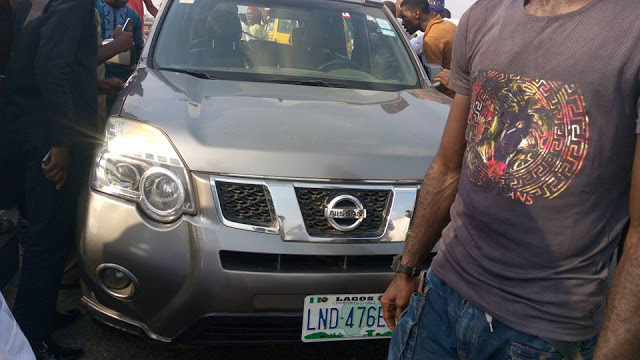 Officials of the Lagos State Emergency Management Agency on Sunday searched for a medical doctor , who jumped into a lagoon on the Third Mainland Bridge , in the Adekunle area of Lagos State .
It was learnt that the man , identified simply as Dr Allwell Orji, was in a Sport Utility Vehicle en route to Lagos Island at about 4pm on Sunday when he asked his driver to stop after he allegedly received a call.
He was said to have walked to the railings on the bridge and jumped into the lagoon .
PUNCH Metro gathered that the vehicle and the deceased ’ s driver were taken to the Adeniji Adele Police Division, while efforts were ongoing to find the doctor “ dead or alive ” as of 8pm on Sunday .
An Instagram user, who claimed to have witnessed the moment Orji jumped into the lagoon expressed shock over the incident.
“ I witnessed the worst thing ever today! The owner of this particular vehicle jumped into the lagoon right in front of me ! I saw him get out of his car ; then jumped . I was directly behind him . I parked and ran as fast as my legs could carry me, but it was too late . I wish he had waited a little longer , I wish I was able to stop him , I wish I was about to hold his hands , I wish he could tell me what the problem was !
“ I ’ m still in shock , I couldn’ t control my tears. I ran after him , I tried to save him , I called for help…. Loads of people stopped because they saw me acting like a crazy woman, the ambulance was present , the fishermen were trying to help, but it was too late ! He left a note on his personalised doctor’ s notepad with his house address, ” the user wrote.
The LASEMA General Manager , Mr . Adesina Tiamiyu , who confirmed the incident, said
some local divers and men of the agency were still searching for the victim in the lagoon .
He said , “ The man parked his grey coloured Nissan SUV with number plate, LND 476 EE , at about 4. 50pm on the Third Mainland Bridge , and jumped into the Lagos Lagoon .
“ Preliminary investigation revealed that the man , Orji , who was being driven by his driver, suddenly ordered the driver to pull over .
“ He alighted from the SUV and jumped into the lagoon from the bridge.
“ The vehicle and the driver have been taken to the Adeniji Adele Police Station .
“ Effort is ongoing to find him or recover his body from the lagoon . ”
The Zone 2 spokesperson, SP Dolapo Badmos , said the marine police joined the Lagos command to search for the victim.
“ The mother and a pastor have come to identify him , ” she added .

A police officer got drunk before killing his wife and himself