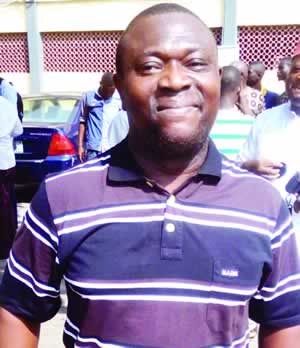 A supervisor at a private school, Mr. Adegboyega Adenekan, has been arrested by the Lagos State Police Command for allegedly molesting a two-year-old pupil.

The 46-year-old suspect was alleged to have lured the girl under the pretext of taking her through sex education in the school.

The incident was reportedly discovered by the mother while she was with her in the toilet.

She then informed the police, leading to the arrest of the suspect.

The victim’s mother, who did not want to be identified, said, “On November 10, I took my daughter to the toilet. And as I normally do, I warned her not to let anybody touch her ‘wee, wee’ (private parts). Then she said, ‘he put his wee wee in my wee wee.’ I asked who? She said Mr. Adenekan. She is two years old, but she can describe everything graphically. As a mother, I wanted to cover it up. I went to the class teacher and asked her whether my daughter discussed anything with her and she said no.

“He said I should tell anybody if I like and that nobody would believe me because he is a pastor. And truly, when I got to the school on Monday, everybody said it could not have happened. He is a supervisor in the primary school section; he has no reason to be in the nursery section. A cleaner in the school told me that my daughter and the man were close.

It was learnt that the parents of the victim organised and conducted a polygraph test on  the suspect.

The result of the test indicted the victim.

A copy of the result, which was conducted by the Halogen Security and obtained by our correspondent, was dated November 15, 2016.

It read in part, “The polygraph examination was conducted on Tuesday, November 15, 2016, on Mr. Adegboye Adenekan, based on the alleged sexual molestation on (name withheld), a pupil of the school.

“The relevant questions used during the test were: did you molest … sexually? Did you have sex with …? Did you fiddle …?

“At the end of the test, Mr. Adegboyega Adenekan was deceptive and therefore was found guilty of the allegation. Copies of the report of polygraph test and the consent form signed by the subject are attached.

“In conclusion, we are of the professional opinion that Mr. Adegboyega Adenekan was not truthful when he denied the allegation of sex molestation against ….”

However, the suspect, who hails from Abeokuta, Ogun State, debunked the allegations, saying he was not in a stable state of mind when the polygraph test was conducted on him.

Adenekan, who was paraded at the police command headquarters in Ikeja on Wednesday, denied touching the victim, urging the police to carry out a thorough investigation into the case.

He said, “On Friday, November 11, I got a call around 8pm from the child’s mother. She alleged on the telephone that I sexually abused her daughter. I asked her when and where? She said she wanted it between the two of us. When she dropped (the call), I was disturbed.  The following day, the child’s father called me from abroad and also said I assaulted his daughter sexually. I said I didn’t know what he was talking about.

“I have never been alone with this girl; I have never bought any gift for her; I have never taken her out anywhere. So, I was so shocked. I called the head teacher and told her about the allegation by the parents. I know nothing about this allegation. I am calling on the police and other security agencies to do their investigation.

She said, “The Commissioner of Police has directed a discreet investigation into the matter. We are going to question the school management on the control it has over its staff.

“We have also done some investigations that we do when it comes to this kind of case. And as young as that toddler is, she is giving us all the graphic description that we need to have. The words of the child against him are weighty.”

My NYSC experience and 21 days in camp diary episode 61