A 46 year-old pastor, Joseph Afolayan, who was arrested by the police in Osun State for alleged fraud, has attempted to hang himself in the police cell.

Our correspondent gathered that Afolayan, a pastor with Freed Zone Church in Ijebu Ode, Ogun State, was arrested alongside his female friend, Miss Bimbo Olanrewaju.

It was learnt that the pastor requested a financial help of N600,000 from  Olanrewaju, saying he needed the money to clear some goods he was expecting from Canada.

Mathew was said to have lodged a complaint at a police station and the police arrested Olanrewaju, but could not get Afolayan.

To get the pastor, the police were said to have asked Olanrewaju to call the pastor and told him to come to collect N150,000 to complete the money that he needed to clear the goods.

It was gathered that when the pastor went to collect the money, he was arrested by the police and detained for further investigation.

It was said that the pastor attempted to kill himself in the police cell because of the shame that the alleged act brought to him.

He was arraigned before a magistrate court sitting in Osogbo immediately after the alleged failed suicide attempt in the cell.

The charges read in part, “That you, Bimbo Olanrewaju and Joseph Afolayan, sometime in May 2015, on Mabinu Street, in the Jaye area of Osogbo, in the Osogbo Magisterial District, did conspire together to commit felony, to wit; obtaining money under false pretences.

“That you did steal the sum of N450,000, property of one Mathew Odeleye, thereby committing an offence contrary to and punishable under Section 390(9) of the Criminal Code, Cap  34, Vol. II, Law of Osun State of Nigeria, 2003.

“That you, Joseph Afolayan, on January 18, 2017, at about 9am, in the custody of the Oke Odo Police Division, in the aforementioned magisterial district, did attempt to commit suicide by using your shirt to tighten your neck in the cell, in other to take your life, thereby committing an offence contrary to and punishable under Section 327 of the Criminal Code 34, Vol. II, Law of Osun State of Nigeria.”

The two accused pleaded not guilty to all the charges preferred against them.

The magistrate, Mrs. Falilat Sodamade, granted them bail in the sum of N100,000 each and adjourned the case till February 20. 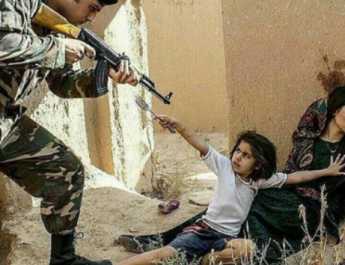 Photo of the day. : this Young boy was defending mum with a fork