drink seller in the Abukuru, Ajegunle area of Lagos State and her lover, 38-year-old Kingsley Pereowei, has come to a gruesome end.

The trader, identified simply as Mary, reportedly slit Kingsley’s throat while he was sleeping in the early hours of Friday, left him in a pool of blood and went into hiding.

PUNCH Metro gathered that Kingsley, who screamed for help, died before residents could rescue him.

Although the immediate cause of the attack had yet to be ascertained, some residents said the couple’s relationship had been marred with incessant quarrels.

Mary was also said to have recently accused the victim of dating another woman in the neighbourhood.

The beer parlour, where Mary sold drinks and also lived with her lover, was under lock and key when our correspondent visited the community on Tuesday.

Kingsley’s elder sister, Linda Pereowei, who resides on Orodu Lane, Ajegunle, was said to have gone to a morgue, where her brother’s corpse was deposited.

Linda later spoke with PUNCH Metroon the telephone, saying she was asleep around 3am on the day when one of the Kingsley’s neighbours came to inform her about the incident.

She said, “By the time I got there, my brother was dead. This is the 13th year that they have been dating each other. She cast a spell on my brother so that he would not be able to quit the relationship. No single child between them and they were not married.

“Sometime last year, she stabbed him in the head and eye. It took months before the wounds healed. She has achieved her aim. We are from Bayelsa State. Our father is late, but we still have an ageing mother. She has not been informed about his death. I want the police to ensure that she joins my brother in heaven. That is all I want.”

A resident, who gave his name as Alade, said the police from the Ajeromi division visited the scene and later arrested Mary.

Alade described Kingsley as friendly and peaceful, adding that the suspect usually harassed him because she knew he would not fight back.

“His death is painful to all of us. She must be brought to justice,” Alade said.

One of the deceased’s friends, Gloria Agbubo, wrote on her Facebook page in pidgin English that Mary was jealous that Kingsley was going after another lady in the community.

She said, “Kingsley was killed by his lover. The man was dating another girl.”

A shoe maker opposite the beer parlour, said Mary and Kingsley were in good terms when he left shop on Thursday.

“It was on Friday morning that a friend called and told me that Mary had killed him. I was surprised,” he added.

The Lagos State Police Public Relations Officer, SP Dolapo Badmos, said a postmortem would be carried out on the corpse of the victim.

“The case has been transferred to the State Criminal Investigation and Intelligence Department, Yaba, for further investigation,” she added. 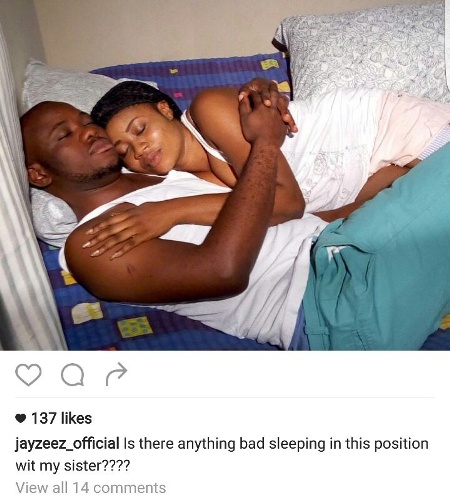 He ask if there is anything wrong sleeping with his sister like this?