‘‘4 Old Friends
Four friends reunited at a party after 30 years. After a few laughs and drinks, one of them had to go to the rest room. The ones who stayed behind began to talk about their kids and their successes.
The first guy says, “I am very proud of my son, he is my pride and joy. He started working at a very successful company at the bottom of the barrel. He studied Economics and Business Administration soon he was promoted and began to climb the corporate ladder becoming the General Manager and now he is the president of the company. He became so rich that he gave his best friend a top of the line Mercedes Benz for his birthday.”
The second guy says, “Damn, that’s terrific! My son is also my pride and joy, I am very proud of him. He started working at a traveling agency for a very big airline. He went to flight school to become a pilot and also manage to become a partner in the company where he now owns the majority of the assets. He became so rich that he gave his best friend a brand new jet for his birthday.”
The third guy says, “Well, well, well congratulations! My son is also my pride and joy and he is also very rich. He studied in the best universities and became an Engineer. He started his own construction company and became very successful and a multimillionaire. He also gave away some thing very nice and expensive to his best friend for his birthday. He built a 30,000 sq ft mansion specially for his friend.”
The three friends congratulated each other mutually for the successes of theirs sons. The forth friend who earlier had gone to restroom returned and asked, “What’s going on, what are all the congratulations for?”
One of the three said, “We were talking about the pride we feel for the successes of our sons.” And then he asked, “What about your son?”
The forth man replied, My son is Gay and he makes a living dancing as a stripper at a nightclub.”
The three friends said, “What a shame that must be, that is horrible, what a disappointment you must feel.”
The fourth man replied, “No, I am not ashamed. Not at all. He is my son and I love him just as well, he is my pride and joy. And he is very lucky too. Did you know that his birthday just passed and the other day he received a beautiful 30,000 sq ft mansion, a brand new jet and a top of the line Mercedes Benz from his three boyfriends.” 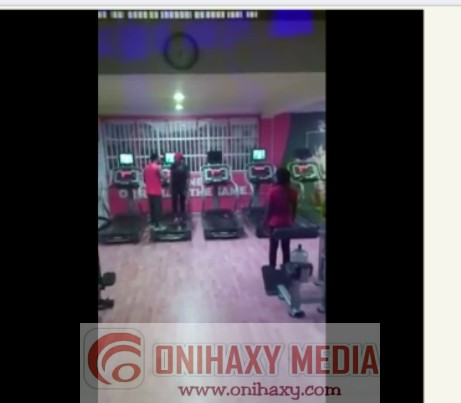 Watch as this guy slapped a man twice at a gym in Abuja.