PART 30
3rd OF DECEMBER 2015 “DAY 9 IN CAMP” “THE LECTURES”
I can’t believe its 3.20am already. Ejike’s ringing tone had been what has been waking me up for some time now. Ejike the bad guy! At this jet age, he still makes extra cool calls at night, disturbing everybody with his calls. I got up to fetch water from the well. I just have to make up for some things I was not able to do yesterday. The most important of them is to wash all the dirty clothes before the morning parade. After a short queue, I had my bath, ran like a mad man to the room, changed before coming out to wash the clothes. It was around past 4 then, not until I heard the sound of the trumpet. Chei! Its 4.30am already. I packed the washed clothes into the bucket (since there is no space to pack them) and went straight to the parade ground.
4.50am already at the parade ground, the weather was very cold and breezy (if I can use that word). We had the usual morning tea (announcement, etc) before being separated platoon by platoon for the morning exercise. At 8am on dot, the trumpet was sounded which signifies that it’s time for breakfast. Oga lagos, our platoon commandant discarded us after we had a brief meeting together with him. Platoon 6 would be having the drama & comedy night tomorrow so all hands must be on deck ahead of tomorrow. I went back to the clinic to check on Seyi and Ruth. Ruth appears to be okay while Seyi is still having some pains towards the bottom of her stomach. Breakfast of boiled yam and stew was served at the studio before we all went to the multipurpose hall to have the lectures for the day.
The lectures are yet to begin when I got there. At 10.16am, the OBS technical guys, Oga John and Jeremiah have successfully fixed the speakers and the microphones so the lectures can now begin. I was at the back stage as an OBS member. The lecture was so boring to the extent that I had no choice but to sleep. I woke up some minutes later when the host was calling the different entrepreneurship skills that are available for training. I opted for the one I know about, which is printing and design. I followed the guy in charge to the class which will be used for the training. The guy did dome painting on 3 shirts in our presence and it looks nice but one thing is missing, my interest was not in it. Some things seem to be wrong with my system this afternoon. When I see that I couldn’t bear it anymore, I walked out of the class to the clinic where I was given two pieces of paracetamol. I went to mama Amaka’s restaurant to eat. I felt so weak and really needed a short sleep before the man’o war training for our platoon by 2.30pm.
I woke up at 2.45pm and with high speed, I ran down to the man o war ground where the guys have conveyed already. We did series of training which I can’t really mention of. The training we did was really scary and fascinating. At the end of it all, our platoon commandant, Oga lagos (Mr Hassan) and Mr Aminu came over with a new uniforms which looks really good on them. We later snapped some photographs together in front of the girl’s hostel. After we were through with the snapping, I went to the field where Ekene has been covering the football game between platoon 9 and platoon 10 which ended in a 2-0 win for platoon 9. With just the few minutes I watched, the platoon 9 guys played the best football of all the platoon games have ever watched. Ekene and I headed back to the studio to make the reports before starting the sports update. Ifeoma and one other guy enquire about Seyi from me and I told them she is getting better but she vomited again this afternoon again when she went back to the hostel. I went to the hostel to check on her around 6.20pm before heading back to the studio. On the way back to the hostel, I decided to call back grace, Ella and Janelle. Grace had called me earlier in the week but I was unable to return her call back. Janelle on the other hand was telling me I have been scarce for some days. 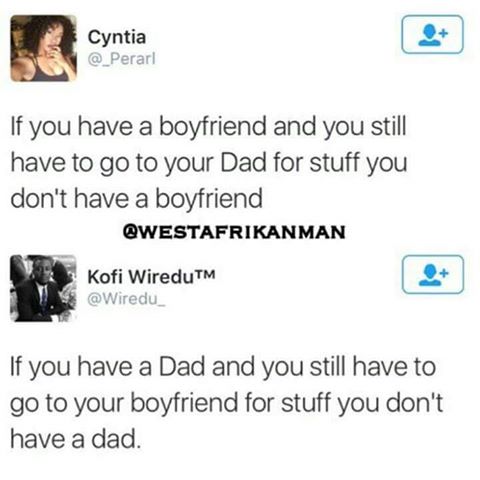 See this epic reply from a guy to a girl.