Part 42
9TH OF DECEMBER 2015 DAY 15 IN CAMP, “BOREDOM”
Alarm waked me up by 4.30am and looking around me, I see that most of the guys are awake already, dressing up for the morning parade. Then I remembered we were meant to be woken up by 2am but this is 4.30am. Seems the short man changed his mind or his he postponing it? I couldn’t bath because of the time factor so I just put on my shoes and went straight to the parade ground. It was extremely cold this morning by the time I got to the parade ground at 5.05am. The fellowship was still on and I had no choice than to join them. We were done with the parade and the morning exercise by 8am. The semifinal football game is slated for 8.30am and as usual, I have to cover the games. At the parade ground, I made a new friend, Pelumi by name. We talked and discussed all through when the parade was going on.
The football games started by 9.30am since the entire footballer had to go and collect their I.D cards while others went for their breakfast. It was just some few minutes into the game when we got an order from the camp commandant that the game should be stopped. The fans were furious about this decision. The referee and Mighty Mic went straight to the head of sport’s office to lodge a complaint while the rest of us had to choice than to march to the multipurpose hall for the lectures. Not quite long, we received an info that the players and match officials should head back to the field to continue the game. The game restarted around 10.25am and it lasted till 11am before it ends in a penalty shootout which platoon 7 won by 4-1. I was happy for chinedu and I know the room won’t be conducive because the final will be between landlord’s platoon and chinedu. After the game, I was hungry. I had to take my bath first immediately I left the SAED class which lasted for over an hour.
Ugo and Matthew woked me up at 3.33pm and I was informed that the bugle has been blown for the evening parade. I have slept for like 30 minutes after eating at mama Amaka’s restaurant. I went to the studio to see what is going on there before going to the parade ground. Getting there, Ekene was busy eating the yeye beans that was served by the kitchen. He was eating like he won’t be eating another thing again today. I wonder if he doesn’t purge with the high rate of beans he will be consuming. Ify and Jessica came in later to inform us that the camp commandant, the short devil was around and he might come to the studio. Nasoo I get up o. Straight away, I went to the parade ground where I met them writing attendance for the people that was present on the parade ground. Not quite long, I saw Ella. We decided to hang around to watch the parade. Seyi called me to know my where about and I described the place for her. Some minutes after, she came. I stood up from my sit so that she can sit while I did a formal introduction between her and Ella. We were watching how the parade was going until we saw the short man with the walking stick picking people from the spectators to go and march. Come see running! I had to leave the field immediately with Seyi to the studio. That short man ehn, his wahala is too much. 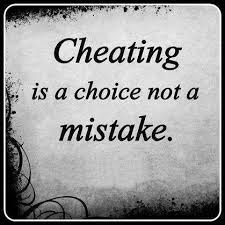 Some reasons why men cheat in a relationship

Save my world. Episode 8