Seun: This giril ehn. I go always dey see am for mamee at night. The person wey she dey go meet nah in I know no o. One of those who gave thumbs up for the OBS song, she’s a lovely sister.

Mighty Mic: The first time I met him, I mistook him for a Yoruba guy. He is a fantastic guy and also the women’s guy. Am sure he is responsible for all the ghost female OBS member I later saw among us. She once had a crush on my Seyi but later back out when I emerged (The WWE Champion, Lol). He was behind the funny act of Janelle’s attitude towards me. (Don’t worry,I will reveal that in the Season 2)

Everybody in the room has slept but only one bed was still empty; that is Chinedu. Ever since he started seeing the NCCF Edo girl, he has been getting to the room late at night. I was in deep thought thinking about tomorrow, thinking where my possible destination will be, a departure to an unknown destination.

I woke up 3.03am. The room was getting boom already as guys don wake up and getting dressed already. We’ve been told to get our mattress back to the studio and get a clearance before leaving the room. I got my bath after queuing for about 39minutes. After bathing, I arranged my bags, put on my Khaki ahead of the passing out parade (POP) later at 8.45am. I took my bags to the studio while I went to the parade ground. Moses got us the signed certificate back to us. The parade started late around 10am. The state coordinator and the representative of the D.G came late to the event while everyone of us was standing in the cold and under the hot sun. We received a text message from NYSC telling us to go and check our portal to know the states we’ve been relocated to.

After the parade, we all ran to the multipurpose hall to check what has been pasted. Although my brother has helped me to check it, I still went there to confirm and it was OYO. I was happy it was not changed. Earlier in the day, I met Joy a friend from the whatsapp group) She told me she had worked her relocation to Akwa Ibom and it was sure. She said she also told Ugo about it and he has done it too. I was shocked. Ugo didn’t tell me about this at all. I was not happy. I would have done it too. At the end, Ugo got his relocation to lagos worked successfully. I was hurt, sad and moody. I went to the stands to pay for the ticket for a bus going to Oyo at N7550. Ugo had also gotten his ticket alongside Godwin, Ayo and Yetunde, Ugo’s secretary. I sat beside a girl named Eniola. That will be the first time I will be setting my eyes on her. Well, how many people you wan know now? People plenty. Ugo was sitting just some few seats ahead of me and we were canvassing really well then the unexpected happened. We heard a bomb blast! 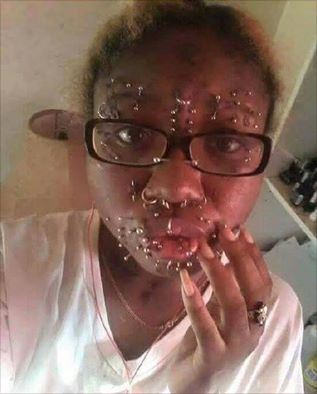 Fashion or trash?, check out this facial piercing