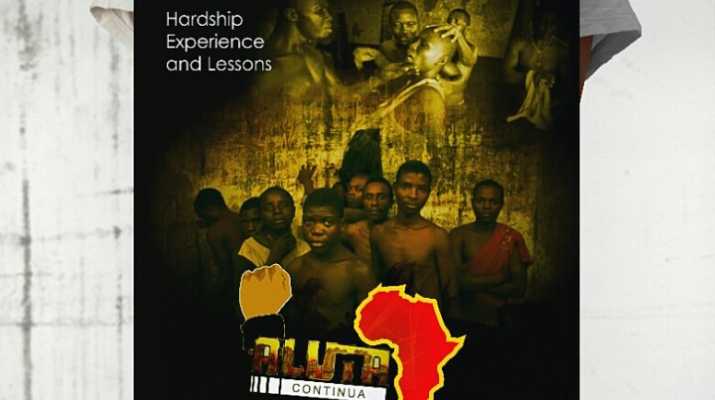 *This is the short story of my life that brought me sadness & happiness. I am from a polygamous family, my father married 3 wives, my mother was the 3rd wife. I didn’t get to know my father at all. He died on NOVEMBER 5 & was buried NOVEMBER 28 well over 20 years ago.*

*He was already old, over 70 years when he gave birth to me, my mother was in her late 40’s. I didn’t really know the reason for my existence several years ago but few years ago, I got to know that I was brought to the world to make positive impacts & leave my footprints on the sand of time.*

*My elder brother & sisters are all older than I am with over 28 years & the least 18 years but painfully, they are all my half brothers & sisters. I’ve no biological brother or sister, this still gives me endless pain till tomorrow & maybe forever because things are not the way it should be.*

*I was always sad on this day (NOVEMBER 28) during the rememberance ceremony of my father in which I took upon myself with my aged mother to always remember him. I always shared biscuits on this day to remember my father whom I never got to know at all but I love him & I’ll always do.*

*I wanted to be a FOOTBALL STAR all my life and I went for several Football trials & competitions. Those who know me very well at home call me “Striker Segun”, “Striker Aye”, etc. At secondary school level too, I played football like there’s no tomorrow. FOOTBALL was my life.*

*I once went for a trial & I won a scholarship to play football abroad(England) immediately I finished secondary school in which I wasn’t allowed to go for all in the name of getting EDUCATED at the University level and also because I still needed some money for some processing of documents on the Football travel which no one was willing to give me.*

*My dream was shattered, I burnt all my FOOTBALL Jerseys & the other Football equipments I had. I cried uncontrollably & heavily & I felt like dying. This day was one of the saddest days of my life & I’ll never forget that day. I couldn’t eat nor do anything, I kept on crying uncontrollably.*

*On another NOVEMBER 28, the day my father was buried several years ago, my half-brother whom we lived together in my father’s house, gave me unprecedented tears of agony. I saw him that morning when I was crying while I was remembering my father & he said he was going to see his younger sister, my half-sister.*

*I said okay, I was still crying due to the fact that my father died on that day(NOVEMBER 28) several years ago. On that day, salt was added to my injury. I went to play PlayStation 2 at a game centre later in the evening to kill time & to feel better. I got home later at night & I was devastated.*

*I saw several people in front of our house & they were all sad, they all looked at me & shook their heads, I was afraid & I asked a woman “Where is my mother?”. She said “she is at the backyard”, I was about going to the backyard when a girl said “Your brother is dead”. It was as if I was struck with an arrow.*

*I ran to the backyard, I met my mother, my half-brother’s wife & some old women. I asked “Ki lo se daddy Micheal?”, they said tearfully “Baba micheal ti lo o.” I was really shocked & I didn’t believe until I was called by my half-sister to bring his clinic card to the hospital to collect his death certificate.*

*I later went to the hospital with his clinic card & I saw my brother sitting lifeless at the back seat of a car. I was shocked & I kept on looking at him but he didn’t move at all. It finally dawned on me that I’ve lost my half-brother on NOVEMBER 28, the same day my father was buried several years ago.*

*Several months passed, I was told that the last wish of my late father was to get educated to the highest level (University). I wanted to be a football star & later go for my University Education but their will prevailed over me.*

*I gained admission into TASUED after 6 years of sitting at home doing jamb & post jamb and also passing in flying colors but didn’t gain admission to study my dream course SOCIOLOGY & CRIMINOLOGY while trying to also start a football career. Things were never Rossy.*

*I couldn’t pay my school fees on time on many occasions, I lent money from some friends, my loving mother too did the same on some occasions just to pay my school fees. I actually missed 3 exams in 100L (EDU 111, EDU 112 & CSM 111) but I stayed strong. I mostly paid my school fees few days to exam but today, it’s all history.*

*At a point in 100L 1st semester, I hired a student painter to Paint my room and two other rooms. I watched him as he painted & I decided to buy my own ‘roller and brush’, I started painting for free. Later in 100L Second semester, I realised that I needed to have something that I can do to fetch me money.*

*So, I started collecting money for the painting & I started drawing painting designs on paper & I carried it out on the wall as ‘Wall Design Painting’ to support myself in school and it was quite good and the money I received for my work wasn’t that bad but the greatest disadvantage is that people do not Paint everyday.*

*Anyway, painting as a vocation really supported me to some extent as an undergraduate & I’m grateful to God for giving me this vocation without learning or training. Stay determined & be willing to always learn because learning starts from cradle till death.*

*I want to use this medium to appeal to undergraduates & even graduates or others reading this to please get a vocational skill such as painting, fashion designing, barbing, hair dressing, make up artistry, electrical repair, furniture making, computer skills, etc. It will help you to be self dependent & less dependent on your parents, in which most are struggling & hustling parents.*

*I was involved in Unionism at TASUED, starting from HOC (Head of Class) of over 300 major Students & over 150 minor Students. I was suspended unjustly for agitating for “No school fees, no test” policy & I painfully accepted it. I moved on to the college level, I aspired & became the P.R.O. (Public Relations Officer) of my college (COSMAS).*

*I later aspired as the SUG PRESIDENT of TASUED due to several ‘injustice’ I’ve witnessed since 100L which I vowed in 100L to put an end to when I become the SUG PRESIDENT. 8 of us contested for SUG PRESIDENT & we were 3 from my college (COSMAS); me(Social Studies) & 2 others from (Political Science & Economics).*

*I prayed that I should emerge because I really wanted to fight for Justice & agitate for the emancipation of my people but if I did not emerge, my friend(CAMAX) from POL should emerge because he’s a ‘like mind’ but he was disqualified & 7 of us contested, I came 2nd to the winner(UBUNTU) who’s now a very good friend. I never stopped agitating for students right even when I didn’t emerge.*

*I once had an encounter with IMAWEJE GUARDS (Olode) with all the male students at my hostel. They arrested one of my hostel mates & as the PRESIDENT of my hostel, I talked to all the boys in the hostel & we went to confront the IMAWEJE GUARDS to get the Freedom of our hostel mate & we stayed there till some minutes after 2am before we could get his release & we all went back to the hostel fulfilled.*

*I also had an issue with OP MESA(Army) at IMAWEJE in which they had to come to my hostel to find me just because I stood for Justice & talked when they expected no one to talk. Thank God I was on teaching practice then, I would have been beaten to stupor. Anyway, I already decided that even if they beat me, they can’t kill me & even if they kill me, they can’t kill my soul.*

*In my final year, I was arrested at LAGOS (UNILAG) with 13 others while agitating for Justice for a blind Student & a graduate that was Rusticated. We were transferred from YABA DIVISIONAL POLICE STATION to PANTI, we slept at PANTI POLICE STATION for a night & was later taken to a mobile court at OSHODI on a Saturday & the magistrate ordered us to be remanded at KIRI-KIRI MEDIUM PRISON for 6 days. I finally thought I would not graduate because it was just few weeks to my final exams.*

*I was released with the other 12 activists from KIRI-KIRI MEDIUM PRISON on April 6 2017 & after a day that I got to school again, I heard some of my friends had been arrested at school. I & two other comrades went to school to get their freedom, I was arrested again & handcuffed with a friend. April 2017 was a crazy month of Struggles for me.*

*After some months, we started our final exams in which I have been reading for since the 1st day of the semester like I’ve always done in previous semesters. I also read like there will be no tomorrow before the exam started fully & during the exam periods everyday. This was the semester I truly got rewarded for my efforts with 8 A’s and just 1 B out of 9 courses.*

*FINALLY! I graduated from the department of SOCIOLOGICAL STUDIES, SOCIAL STUDIES Unit of COLLEGE OF SOCIAL & MANAGEMENT SCIENCES (COSMAS), TAI SOLARIN UNIVERSITY OF EDUCATION (TASUED)-1st University of Education in Nigeria, 2nd in AFRICA & 8th all over the WORLD, with a very strong 2nd CLASS UPPER grade of Degree of over 4 points out of 5 possible points.*

*I believe that a lot of moral lessons would have been learnt from the short story of my life but the one that I really want us to hold tight is this: Do not hate any day or date in your life or even curse those days or dates. Some days or dates might have brought you sadness in your life which you’ll never forget but do not hate that date or day because of those sad occurrences or experiences or incidents because the same date or day that brought you sadness might still bring you happiness & plant a beautiful smile on your lips that you’ll always remember for good in the future.*

*This is the “SHORT STORY OF MY LIFE THAT HAS BROUGHT ME SADNESS & HAPPINESS (NOVEMBER 28)”.*

*Written by:*
*OKESOLA OLUWASEGUN TIWALADE*
*(SETIOK)*
*A SON OF A NOBODY THAT WILL BECOME SOMEBODY ONE DAY.*

*We are nothing but pencils in the hand of the creator.*

Jokes of the day