Throwback Thursday .
Tale of a lesson teacher.
EPISODE 12.
On getting home that sunday night, my mind wasn’t at rest. I was worried about sikirat, what if she is truly pregnant?, won’t I be implicated?, or was sikirat keeping other guys apart from me?, I kept wondering.
Monday is another lesson day, I don’t have the liver to go to the white house. I tried calling sikirat but her number wasn’t reachable. I just have to know sikirat’s pregnancy status before
going there for tutorial class. I called janet but she wasn’t picking. “Chaiii, e don happen. I don enter am”.
I dressed up, stopped a bike, went straight to the house, I knocked on the gate and oga peter opened. I stylishly ask him if anything is happening in the house, he replied “something like
what?”, then I was sure oga peter no “jasi” wetin dey go on. I went into the house and met janet watching africa magic in the living room.
ME: janet how are you?
JANET: **hugged me** I am fine dear, and you?
ME: I’m doing good. How is janet?, was she eventually pregnant?
JANET: and are you responsible for it?
ME: me keeee?, just asking since I was here yesterday when pregnancy issue was mentioned.
JANET: anyways, she was taken to hospital this morning and she was negative.
ME: ***took a deep breath***, sebi I said it that I trusted her, she isn’t a wayward girl.
JANET: hmmm. Well, I have been suspecting the two of you because I have seen your number on her call list more than thrice.
ME: meee?, maybe its another onihaxy.
JANET: well, If you say so.
ME: ***scared****. Alright dear. Where is she now?
JANET: she is at the backyard washing cloths. So when are you packing over?
ME: maybe this weekend
JANET: not maybe, mummy said you must move in this week.
ME: ok ma, can we start our lesson now?
JANET: no lesson today abeg, come with me inside my room, I want to show you something.
I sat on janet’s bed, looking all over her room. What is it that you want me to see? I asked. She went to her wardrobe, opened it and brought out a black nylon. She opened it and brought out 3 bras and 2 pants. “I just got them today and I want you to tell me if they are ok on me.
“Chaiiii, which kind temptation be this”
Janet unbuttoned her shirt, removed her bra stripes. “Omo see bobby”, my dick signalled instantly. She bent on the bed, picked the first bra, wore it and faced me, “onihaxy, how does it look?” I replied “great”. She dropped the bra. Picked the second bra, wore
it, the second one looks tighter, she faced me and asked, how does it looks like? “Sexy” I replied. This time, I am getting uncomfortable, my dick is getting harder. She picked the 3rd bra,
it has no top stripe and it doesn’t cover her breats fully. ”
Chaiiiii, see almighty bosom”. She faced me, “how does it look?”.
Waoooo, its cool. “I replied”. She dropped it, raised up her short skirt, removed her pants, “chaiiii, see fresh punny here infront of me, what is this girl trying to do?, should I bounce on her?”. She wore the first pant, faced me, “how does it look?”, cool “I replied”.
She pulled it off, wore the last one, it was a G-string. She faced me, “onihaxy, how does it look like?” She asked. This time, my urge has became uncontrollable, I couldn’t resist it anymore. I said wait “let me check it myself”. I stood up from the bed. Went
closer to janet. Touched her pants “this is really sexy dear”, I moved my hand upward to her full Unclad bosoms, I grabbed it and squeezed, she released a soft moan. We walked backward to
the bed and fell on it while I followed her. I continued squeezing the bosom as she was moaning louder. I locate the tips with my mouth and sucked. I moved my hand down to her G-string, pull it aside to one side and manipulated her, janet was so wet. After 3mins of finger bleeping, janet whispered “please Bleep me abeg”. I opened my wallet, picked a condom, unzipped my trouser to the kneel level and wore. I pulled janet’s hip to the
edge of the bed, spread her leg. I knelt down on the tiles and bleeped her, she was moaning heavily so I opened music on her phone and increased to the loudest volume while bleeping. I
turned her over. Her buts still at the edge of the bed and facing up, I spread her legs apart and bleeped her in this “customized doggie style”. I bleeped for the next 9minutes and we both cum.
We dressed up and walked out of the room. On stepping out, I saw sikirat mopping the tiles in the living room. Our eyes met. She looked me with ” an eye of disappointment”.
“Chaiii, sikirat don catch me”. I ignored as if nothing happened. I sat on the chair waiting for gideon to return from school while janet continued watching her “africa magic”.

<<<<<< To Be continued>>>>>>>>
TIRED OF WAITING FOR WEEKLY UPDATES????
Full story with complete episodes is available for sale at just N100 only.
you can buy a copy
1. online using Voguepay/
2. by direct bank transfer to any of our accounts
3. paying with Mtn airtime.

Throwback thursday: Tale of a private lesson teacher episode 7 and 8. 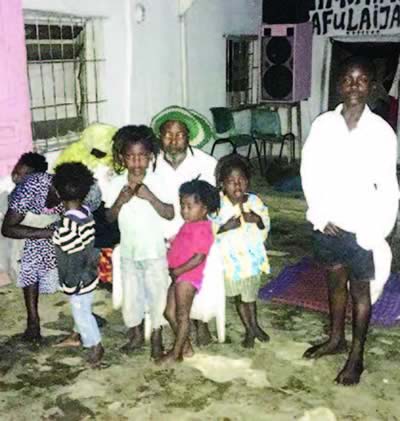