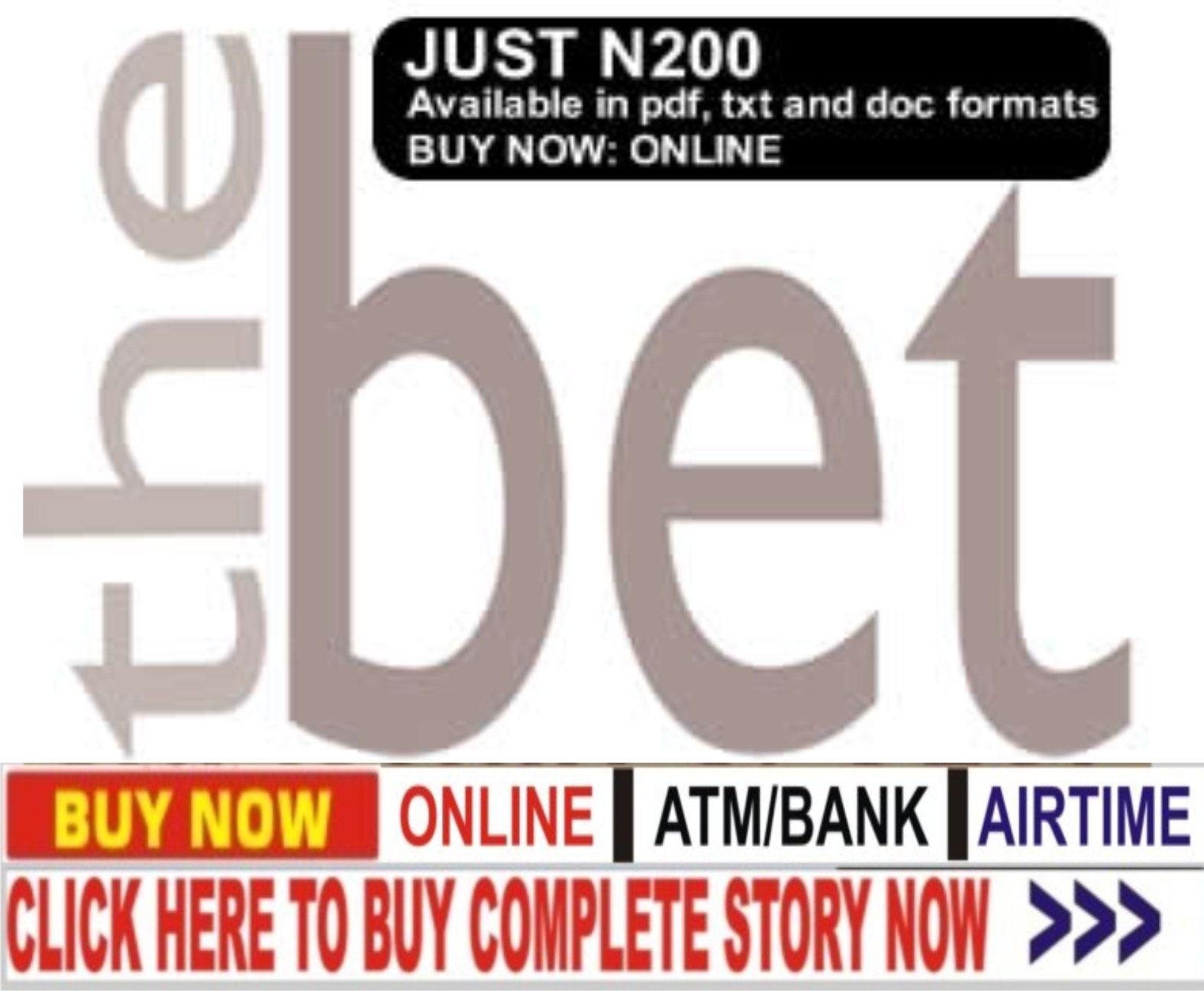 The fact that henry dumped her was not just embarrassing but it was also a slap on her ego, she had dated and dumped so many big boys, designers, actors, musicians and big time entrepreneurs but here she was being dumped by a common 2nd year student, she suspected he must have left her for someone better and bigger but who could be bigger and better than the amazing Sharon Richard? Absolutely no one especially not in the school, she made up her mind to find out who he left her for. She contracted some guys in the school and asked them to follow Henry Davies, chemical engineering, 200l

what do you want to know about him? guy1 asked everything, especially who he is dating, sharon answered
well, who he is dating is known by almost everybody in the school, it seems you have been absent from school for a long time guy2 said My presence and absence from school is not any business of yours, who is the person? Sharon said angrily

Yeah, do you need us to get her for you? guy2 asked

Don’t bother, I will get her myself, I need to have a word with that young lady….

Sharon later drove to the department of business administration, she went into the department and got information from some people about grace ameh, she then walked back to her car waiting for her to exit the class…

Felix saw Sharon drive into the department so he followed her to find out why she was there, when he was told that she was looking for Grace Ameh, he immediately got the message so he dialed henry’s number immediately but henry didn’t pick after the first call, he later called him back later

Dude, I was in the lab, what’s up? Henry asked Did you tell Sharon about Grace? Felix asked Hell no! I did not

Well, I saw her drive into my faculty about an hour ago, I was curious to know what she came looking for in my department so I followed, I saw her talking some people and when I asked them what she was looking, they said she was asking about Grace Ameh
What! Where is she now? And where is Grace? Henry asked

Grace is still in class and sharon is in her car, looks like she is waiting for Grace

You know what, am on my way there now, try to make sure they both do not meet, henry said before hanging up….

Immediately Grace came out of class, a guy walked up to her Someone wants to see you, the guy said

Who? she asked
Just shut up and follow, he said showing her a pistol

She quietly followed him and the guy led her to where sharon was Well, well who do we have here, The famous Grace ameh, sharon said immediately the guy and Grace got to where she was
Sharon Richards? Grace asked looking surprise

Yeah,I know you know me, you probably want to be me, sharon said laughing

I will explain, you know henry davies, he is what is going sharon said I still don’t understand, Grace said

Okay, henry is no sorry was my boo not quite long ago, we had the best kind of sex, in my car, in his car, on the couch, on the floor, anywhere, everything was fine with us until about a month ago when he stopped calling or taking my calls, when I confronted him about what he was doing a week ago, he told me he was no longer interested in me, he dumped me, honestly I knew deep down that he was leaving me for someone but I thought it would be someone better than me but you and I know that nobody is better than sharon richards. Because of the kind of job I do, I am usually not in campus, I came in yesterday and started hearing stuffs about you, so I did my little investigation and here we are. I was really curious to meet the person he dumped me for, I must admit you are pretty but that’s just all that you are, pretty and nothing more, so why the hek did he leave me for you? Sharon explained and ended it with a question

I don’t know about that and honestly I never knew henry was with you, if I had known, I wouldn’t have agreed to be with him, am sorry, grace said with tears in her eyes

No, no need to apologize, I did not come here to fight or quarrel with you, like I said I was curious to meet you and plus I wanted to advice you

Yeah, I mean look at me, am sharon richards, I have money, fame, connection and everything money can afford, if that bastard could dump me, why wouldn’t he dump you? Stay away from him, henry is just a player, nothing more, I can bet he is just playing you, have a good day, she said and entered her car and drove off

Just some minutes after, henry drove into the faculty and saw Grace seated at the same place sharon left her, he walked up to her

Hey bae, he said sitting next to her

She raised her face up and he noticed she was crying Why are you crying sweety? He asked

Who is Sharon Richards to you? She asked ignoring his question Oh God, what did she do to you? Henry asked

Just answer my question, who is she to you? Grace asked again She is my ex girlfriend, henry said

Ex girlfriend? How many ex girlfriends do you have? We have been together for just some weeks and I have already met three of your ex, she said raising her voice in anger

Sweetheart, its not what you think, I ….

You know what, I really want to be alone, she said and walked away from him
<<<<<< To Be continued>>>>>>>>
Full story with complete episodes is available for sale at just N200 only.
you can buy a copy
1. online using Voguepay/ Cashenvoy
2. by direct bank transfer to any of our accounts
3. paying with Mtn airtime.

To buy a copy. please click HERE
PROMO STILL ON…. BUY ANY TWO STORIES, GET ONE FREE.

My NYSC experience and 21 days in camp diary episode 33