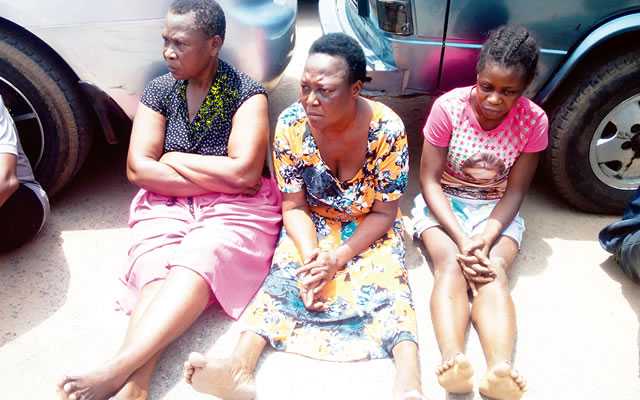 A 50-year – old grandmother , Rita Eze, has confessed to being a member of a syndicate that allegedly involved in abducting children from Lagos and selling them in Anambra State .
Eze was paraded along with one Ogochi Nwekei and Gladys Augustine at the Lagos State Police Command headquarters in Ikeja on Tuesday. The fourth suspect, Elizabeth , who was said to be ill, was not paraded .
PUNCH Metro had reported that Augustine, who claimed to be Mary John , connived with one Samuel, who is at large , to abduct three – year -old Oluwasemilore Adebiyi , from her parents’ residence in the Alagbado area of Lagos .
To hatch the plan , 28- year -old Augustine enrolled for beads-making apprenticeship at Oluwasemilore’ s mother ’ s shop in January , giving her name as Mary John. She fled to Anambra with the girl seven days after.
The girl was handed over to Eze, who confessed to selling her to Elizabeth through Nwekei, for N 500, 000. Oluwasemilore was , however , recovered by the police after Augustine was arrested in the Badagry area of Lagos on February 23.
PUNCH Metro had further reported that some parents from different parts of the state had stormed the command and identified Augustine as the abductor of their children , saying the suspect adopted the same gimmick with which Oluwasemilore was abducted .
The victims included four -year -old Farouk and his sister , Kafayat, 6, who were allegedly abducted in the Okokomaiko area in November 2016. The children had yet to be found .
But Augustine denied abducting the kids , saying , Oluwasemilore was her first abduction . She said Samuel had lied to her that he and Oluwasemilore ’ s mother , Tobiloba Adebiyi , gave birth to the girl , but she ( Tobiloba ) denied him access to the girl.
The Cross River State indigene stated that Samuel introduced Eze to her as his mother and promised her N 50, 000 if the plan worked out .
She said , “ I came to Lagos in 2010 and I worked as a housemaid. I used the money I got to open a shop. Eventually, I was sent away from the shop and I needed money to start another business . I met Samuel at Mowo bus stop in Badagry in January.
“ He said he impregnated a woman and the woman ( Tobiloba ) left him to marry another man . He said he wanted to get back the child , but the woman refused . He asked me to work for the woman in order to snatch the child and he promised to give me N 50, 000. On the day I snatched the girl, I took her to a bus stop and bought her a snack .
“ When I took the girl to Samuel, he said I should take her to his mother , Mrs . Eze , in Anambra. He said he would tell the girl ’ s mother that he was the one who took her. I later returned to Lagos , thinking he had told the woman . I was surprised when the police arrested me. ”
The grandmother, Eze, told
PUNCH Metro that she took N 40, 000 from the proceed , gave Augustine N 60, 000 and sent the remaining sum to Samuel. She added that she used the money to pay the rent on her apartment .
She said , “ I met Michael in December 2016 at a party in Awka through a secondary school friend , who is an aunt to him . He told me that he impregnated a woman in Lagos and that he would send the child to me to help take care of her. When Gladys ( Augustine) brought the girl, Samuel told me to sell her for N 500, 000. 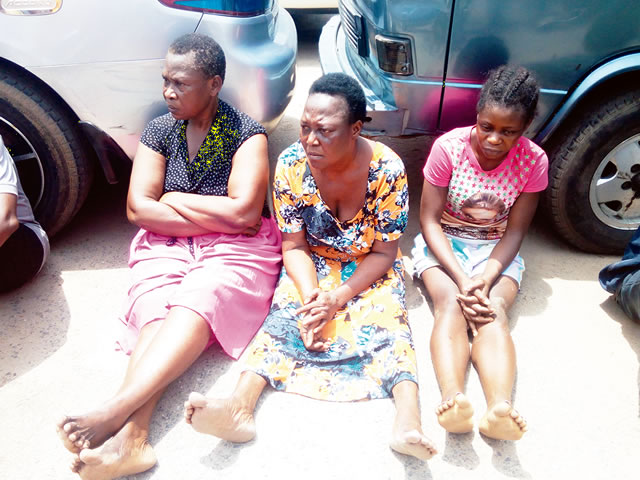 “ I informed Ogochi ( Nwekei) and she said one of her friends , Elizabeth , wanted to buy a child. Elizabeth paid N 500, 000. Samuel told me to give Augustine N 50, 000 and another N 10, 000 for her transport back to Lagos , while I got N 40, 000. I sent the remaining N 400, 000 to Samuel. I used the money to pay my house rent. I have five children and grandchildren. ”
Sixty -year – old Nwekei said she only facilitated the sale of the girl, claiming that she did not receive anything from the money.
“ I told Rita ( Eze ) that a friend , Elizabeth , wanted to adopt a child and she promised to call me whenever she got one . One day, she called me that a child was brought to her. I asked her whether there would not be any problem and she assured me that there would be none. I didn ’ t know it would turn out this way, ” she added .
The Lagos State Commissioner of Police, Fatai Owoseni , while briefing journalists on the arrest, said the suspects would subsequently be charged to court .

Opinion: why you shouldn’t invest in a girlfriend

Don’t kill me, send me to jail, suspected killer of ex-wife’s husband begs