The dragon king
A story written by ademolar
Episode 4
(Escape )
The night beamed out its darkness filling the air with simultaneous sound of thunder and smidgen of lighting as adigun and queen tinuade walk tirelessly in the middle of the forest .
before they could get to alaran the demon hunter , the queen was already in labour, she fell along the road side crying and bleeding, but adigun who is not but just a servant does not know what to do, he stood at the middle of the forest and cried at the highest pitch of his voice seeking for help but there is no one to hear him cry, he was left on the river of confusion so he decided to run back maybe luck could smile on him and he will be able to get a divine helper .
Immediately he left , the same old woman who gave the prophecy about what will happened to her came out of the forest,without wasting much time she helped the queen deliver a baby boy with a golden wrist band on his left hand..
she took him in her hands, she turned facing the queen
Old lady : ” heaven has blessed you with a great boy, he shall save his father’s land from the hands of the evil one’s..” * she threw a wide grin *. his name shall be called ajadi, keep this golden wrist band out of his reach until he is ready.. !!
Queen : but when will I know if he is ready? (she said in a faint voice laying helplessly on d floor)
Old lady : don’t worry, when the time comes you will know.. I have to go now..
She gave her the boy and she walked out of the scene till she was totally out of sight.. , adigun return few minutes later accompanied by two average aged ladies, but they saw the queen with a baby, they stood there in a surprised mood, but there is no point is asking “how come” since its rampant for ladies giving birth without the help of no one but the creator.. they quickly help her up and they keep walking till they locate alaran the demon hunter, adigun quickly present the message to alaran and he joined him to help the queen and the baby in..
The next morning, the news of ayetoro and the king got to alaran and he walked up to the queen and he informed her about what later happen to the king.. alaran : “loki has put you on his wanted list, pledging to reward anyone who find you with 2000 pieces of silver , very soon he might find out your whereabout, so from now onward you have to pretend as if you are my wife , your name from now onward you have to start living like a commoner, you must not reveal who you truly are to anyone ” he said and look for a place to sit
Tinuade wept really bad to the extent that adigun noticed and he rushed in..
Adigun : “my queen why are you crying ” he asked furiously as if he is ready to attack anyone behind the reason for her tears ..
alaran went ahead to explain everything to him but he was impotent to do nothing ..
Few days After loki and his men had successfully conquered the village, the king makers made him the king, and he appoints Ogidan as the king’s hand ,he ordered his soldiers to behead all the chiefs who were not in support of his ruling , he kill and enslave anyone who tried to oppose his command and also banish the chiefs who had escaped the village that very night .
This made the people fear him a lot, he made a law that everyone must present 70% of their havested food to the palace every month, and also made it known that anyone who refused to comply to the law shall be jailed.. this eventually made him rich, powerful and famous , he took total control of the village and sold most of adejare’s trusted savants into slavery, he locked adejare in the palace prison.. but his mind was still not at peace because adejare’s wife left with a pregnancy and he knows that one day, the baby will come seeking for revenge..
.
.
.
(15 year later)
ajadi began to grow strong in power and wisdom, no one knows anything about him cus they (his mother and adigun ) never mention or reveal their real identity to anyone . Ajadi looked the part of a vagrant … he has the bold looking face and strong agile spirit like that of his father ..Right from his childhood days, he had been doing things most old and stronger one’s are incapable of trying..One day, alaran was set to go for hunting he called out his daughterToke! Toke!! Get me my hunting tools, it’s time for hunt..he echoed a high tune message to toke..few minutes later toke came out with the tools, when ajadi saw this he quickly stood and went outdoor, ..
Ajadi : good evening father..
Alaran : ajadi jadi! (he hailed), how are you?
Ajadi : am fine sir
Alaran : thats good, my son..as you can see, am ready for the moonlight hunt, one must be vigilant and strong in handling his job, else hunger will strike that person..
Ajadi : but can I followed you down to the forest? ..
Alaran : *laughed * sorry it’s not a journey for kids like you, you are barely 15 and you want to go for hunting, don’t worry I will get you something good after the hunt.. (he pat ajadi on his shoulder)
Ajadi : *laughed* daddy I want to follow you, I know am still a boy but one day I will become a man I won’t start learning how to hunt when I become old.. It starts from now..
Alaran : are you sure you are bold enough to go out there?
Ajadi : am sure sir…
Alaran : ok go in and get yourself prepared..
To be continued……….. 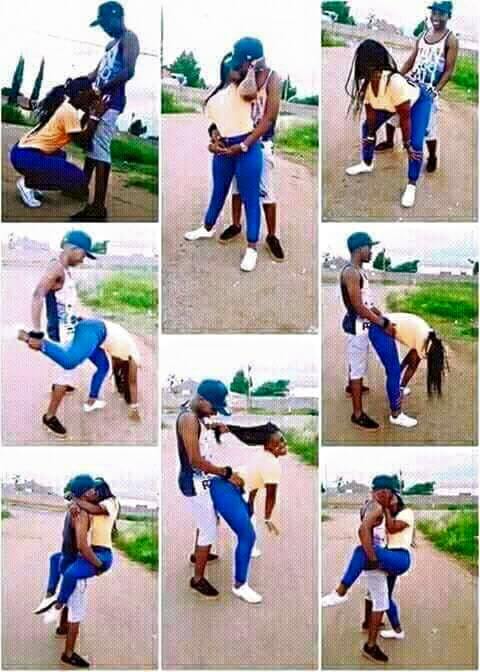 Photo of the day : caption this pre-wedding shots.

The police and the hacker boy. Episode 11