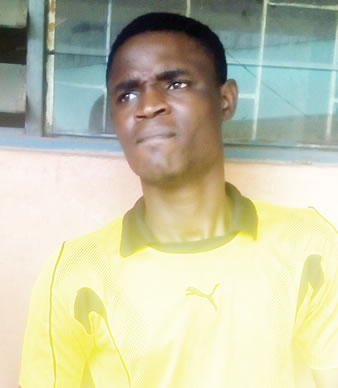 A 27- year- old man , Moses Momoh, is cooling his heels in a police cell after allegedly threatening to circulate the nude photos of a 60- year -old retiree , identified only as Pat.

PUNCH Metro learnt that the secondary school leaver had struck a relationship with Pat on Facebook after sending her a friendship request .
Our correspondent was told that the two lovers conversed frequently on Whatsapp, a telephone messaging application , where they engaged in virtual romance and sex.
It was gathered that Momoh later demanded money from Pat, which the latter refused to give him .
He was alleged to have threatened to post her nude photos on the Internet if she didn ’ t give him the sum of N 1m .
The Benin- based sexagenarian was said to have reported the case at the Zone 2 Police Command, Onikan , Lagos State .
A police source said the Assistant Inspector- General of Police, Adamu Ibrahim , asked operatives in the Criminal Investigation Department to investigate the case and apprehend the suspect .

She said , “ In the course of investigation, we discovered that the man lied about his age ; he told the woman he was 47 years old . When the woman saw his profile pictures , she queried him . He replied the woman that pictures could be deceptive.
“ The woman told him she was 60 years old and since the age difference was insignificant, they started a relationship.
“ They were always talking on the telephone , making video calls and having video romance and video sex . The woman was , however , unaware that he was storing the information in his phone.
“ She said he later started requesting money from her and when she could no longer bear his frivolous demands , she blocked him on Facebook and
Whatsapp. However , the suspect opened new accounts and sent her messages . He also called her with his friend and mother ’ s telephone numbers.
“ He later sent some of her nude photos to her and threatened that if she didn ’ t send him N 1m , he would post the pictures on the Internet . ”
The source said the retiree immediately reported the case to the police.
PUNCH Metro learnt that some policemen positioned themselves at a Lagos hotel where the duo had agreed to meet .
“ When he entered the hotel room , he asked her to go and shower. He also undressed. The woman, after bathing , asked him to get her a drink . He had stepped out when she quickly alerted the police to his presence in the room . He was then arrested, ” the source added .
However, the Kogi State indigene, who lived with his parents in the Alagbado area of Lagos , said Pat sent the photos to him of her own volition .
He said after their friendship started on Facebook , Pat blocked him because she suspected he was not trustworthy.

He said , “ I got her phone number from her Facebook page and called her . We reconciled and our relationship blossomed.
“ However , a few days later , she told me that she could not enter into a relationship with me and would rather offer one of her daughters to me. I agreed. When she didn ’ t get back to me, I called her and she said she had changed her mind and that she would give our relationship a try since I was interested in her and not her daughters .
“ We were always chatting on
Whatsapp late at night and early in the morning. She called me one morning and said she didn ’ t sleep well . She said I should understand what she meant . I asked her to have a bath , dress up and come down to Lagos . She said she didn ’ t have the money to make the trip yet . She then asked to see my nude pictures , which I sent to her.
“ Around the evening of that day, she called me , saying she wanted to show me something . She removed her blouse during the video call, revealing her private parts and breasts . I took snapshots of some of the video calls because the phone I was using was not mine and I wanted to save the pictures for myself. At another time, I was at a meeting when she called and exposed her private parts to me . I have about 20 of such pictures . ”
The suspect said Pat had only given him N 5, 000 since they started the relationship.
He added that she had got N 150, 000 from another boyfriend in Abuja .
Momoh explained that when he requested N 5, 000 from the money, the 60-year – old started insulting him .
“ I told her on Whatsapp that it was bad we were in a relationship and she was not ready to help me . She then blocked me. I sent her some of her nude photos and threatened to send them to her daughters to disgrace her.
“ She called back and apologised , asking what I wanted. I told her to come down to Lagos so we could reconcile. She agreed to spend the weekend with me . I helped her to look for some cheap hotels and we agreed to meet at one of them .
“ On Friday, around 8pm , she told me she was at the hotel . We had only sat down when the police walked in and arrested me, ” he added .
While denying making a demand of N 1m , he said he regretted the relationship.
The Zone 2 Police Public Relations Officer , SP Dolapo Badmos , warned members of the public to be wary of Internet fraudsters .
She said , “ The AIG has instructed that the case be charged to court . ”